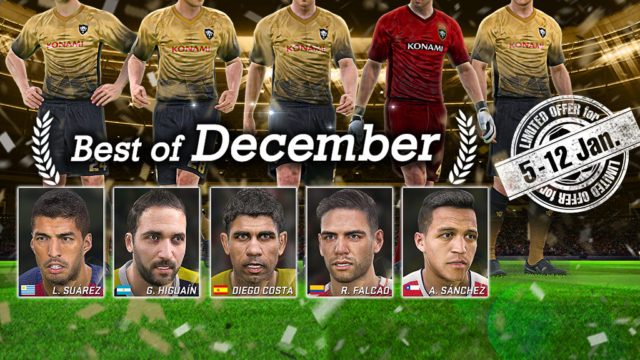 The Best of December campaign will be held this week.
The chosen players or teams performed amazingly in December, based on the [Live Update] release and real world performances.

In addition, events will be held, such as the [Online Challenge Cup], which enables you to get a [GP] bonus if specific players are included on the squad!

■Special agent: Best of December
Players who played great in December and have an overall rating of 75 or more will be chosen. This is based on the [Live Update] release.
*Subject players are based on Live Update of Club Squads but due to transfers they are always changing so please confirm the subject players of each special agent in the [List of Targets].
[myClub menu] => [CONTRACT] => [Special Agent] => [List of Targets]

■Manager Line-Up
The 10 managers who coached teams that played great in December will be chosen, based on the [Live Update] release.

■VS COM Challenge Cup
You can obtain [Special agent: Best of December] as a first-time reward,
if you beat any teams that played great in December, based on the [Live Update] release.

■Online Challenge Cup
If you play the match with a squad that includes 3 players from [Special agent : Best of December], GP rewards that can be obtained will be 150% more than usual!

You need to stay in the Competition window during the qualifying round and at the end of the Final round to receive your competition rewards.