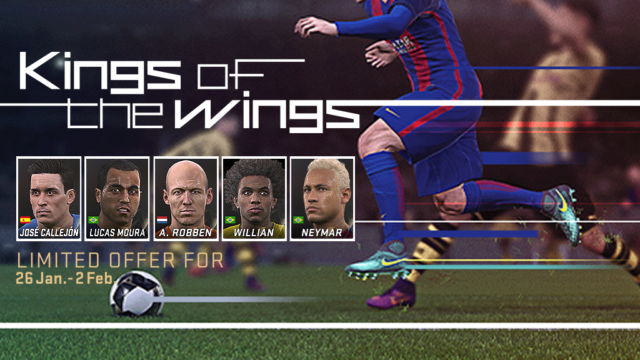 From January the 26th to February the 2nd Konami is presenting a special agent for wingers.
You can win one agent by playing the vs Com tournament and three by beating the online challenge.
Also there is a Double XP Week and the UEFA TOTY Agent, which you can obtaing by playing the UEFA CL vs Com Tournament

All news regarding this week you can find below

A Special Agent specialising in Out Wide offensive players is available now!

.
■Special Agent : Kings of the Wings
Pick up players who are strong Out Wide in attacking positions and have an overall rating of 75 or more.
*Attacking positions for Out Wide: RWF, LWF, RMF, LMF.
*Subject players are based on Live Update of Club Squads but due to transfers they are always changing so please confirm the subject players of each special agent in the [List of Targets].
[myClub menu] => [CONTRACT] => [Special Agent] => [List of Targets]

Experience Points that are available from all matches in myClub mode, that can be obtained in twice as more than usual! Let your players develop in this opportunity!