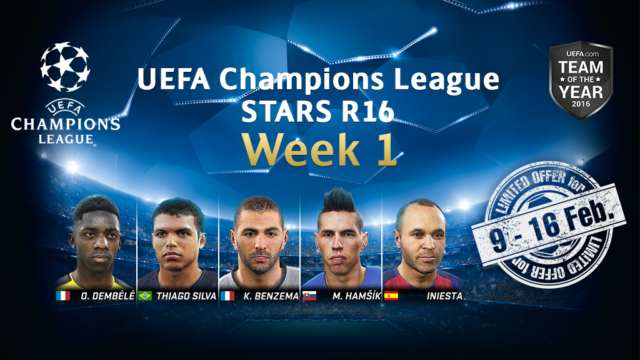 The UEFA Champions League returns for the knockout stages! Who will be crowned Europe’s top club this season?

Players from seven clubs that play on 14/2 and 15/2 are available in the first week of the campaign, as well as the 11 players from the UEFA Team Of The Year 2016! This is the perfect opportunity to celebrate the return of the UEFA Champions League in style!

■Period
9/2/2017 8:00 (UTC) – 16/2/2017 4:00 (UTC)
*This period is possibly affected to change by the maintenance.
■Special Agent: UEFA Champions League STARS R16 Week 1
11 players from the UEFA Team Of The Year 2016 will be available. The campaign also includes players with an overall rating of 75 or more and belong to a team that plays on 14/2 and 15/2 having advanced from the group stages of UEFA Champions League. In addition, a single-use Special Agent who guarantees a player with an overall rating of 80 or more is also available.
*myClub menu [Contract] – [Special Agent], press [List of Targets] button in the Special Agent list to confirm the available players list in each agent.
■Manager Listing
The seven great managers behind the teams that play at 14/2 and 15/2 will be on the list!
■VS COM Challenge Cup
You can obtain the Special Agent [UEFA Champions League STARS R16 Week 1 as an initial reward, but only if you beat three teams that play their games at home on 14/2 and 15/2!

There’s never been a better time to start a new myClub!