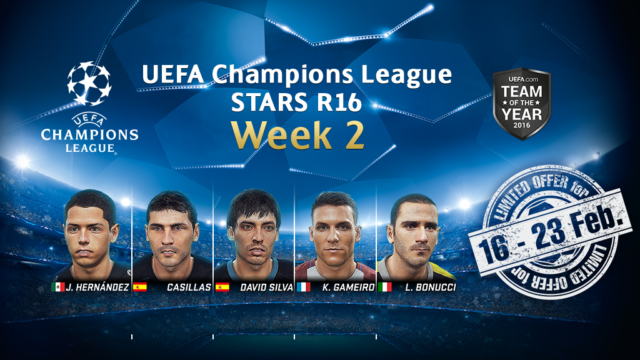 For this week we can obtain all players which will play next week in the UEFA Champions League. These are the players of the following clubs.

The Round of 16 knockout stages for the UEFA Champions League is now into its 2nd week. Who will be crowned Europe’s top club this season?

Last week’s extra special myClub campaign continues in PRO EVOLUTION SOCCER, an officially licensed UEFA product.
Players from 8 clubs that play on 21/2 and 22/2 are available in the 2nd week of the campaign, as well as the 11 players from the UEFA Team Of The Year 2016! This is the perfect opportunity to celebrate the return of the UEFA Champions League in style!

■Period
16/2/2017 8:00 (UTC) – 23/2/2017 4:00 (UTC)
*Exact times may be affected by maintenance.
■Special Agent: UEFA Champions League STARS R16 Week 2
11 players from the UEFA Team Of The Year 2016 will be available. The campaign also includes players with an overall rating of 75 or more, and belong to the 8 teams who advanced from the group stages that play on 21/2 and 22/2. In addition, a single-use Special Agent who guarantees a player with an overall rating of 80 or more is available.
*myClub menu [Contract] – [Special Agent], press [List of Targets] button in the Special Agent list to confirm the available players list in each agent.
■Manager Listing
The 8 great managers behind the teams that play on 21/2 and 22/2 will be on the list!
■VS COM Challenge Cup
You can obtain the Special Agent [UEFA Champions League STARS R16 Week 2] as an initial reward, but only if you beat four teams that play their games at home on 21/2 and 22/2!